Firstly, I want to welcome and thank the few subscribers that signed up for this newsletter this past month. There was a slight upsurge in blog traffic this month due to the impending closure of all unregistered SIM cards. Most of the visitors were referring to an article I wrote back in April this year on how to self-register Safaricom SIM cards when the initial directive to update SIM registration details was issued by the CA.

No new articles this past month, but I’ve updated a few ones which may be of interest to you:

1. How to Transfer Airtel Kenya Airtime

A short how-to on how to transfer your Airtel Kenya airtime or sambaza as it’s more commonly known. The service works pretty much like the Safaricom one and incurs you no charges. Surprisingly, some Airtel subscribers are not aware of this service despite it being in existence for many years now. Telkom Kenya likewise has a similar service called PEWA.

I wrote this a couple of years ago, fresh from finishing my Nutrition degree on a now defunct nutrition blog. This article is literally as the title suggests — the type of foods and their respective portions on a plate model that you can adopt as a simple guide towards achieving a healthy diet.

However, this is not meant to be taken as the gospel, but merely a starting point to explore what can work for you as an individual. Likewise, I cannot in good faith recommend any so-called “diet” because I know different individuals have different needs, expectations and abilities on how they meet them — from their income, lifestyle down to their physiology / genetics.

Instead, it seems to me that having a grasp on the basics of nutrition is a far more worthwhile endeavour in the long-run rather than buying into the never-ending fad diets that come and go (i.e. if your main goal is geared towards safeguarding your health). This is the direction the article is gearing towards.

There’s too much misinformation nowadays, mostly due to advertising or rather, profiteering, so the best safeguard is to conduct one’s own research before believing any too good to be true claim regarding your health (especially with regard to ‘weighty’ matters — that’s the main source of most of these often costly panaceas).

I’ve been keeping track of the fuel prices since they skyrocketed around mid this year. It seems nobody else was tracking them online, so I took the initiative to keep a historical record — that’s the main basis for maintaining this page.

While we’re on this topic, how many of you noticed the subtle shrinkflation that’s been going on? It’s one of those shady practices manufacturer’s resort to when they don’t want to raise prices of basic commodities during periods of high inflation (or is it stagflation?) such as the one we’re currently experiencing.

The quantities, even of something as inessential as Vaseline, have been reduced slightly (from 50ml to 45ml in this particular case) however you’d be lucky to notice this since the packaging hasn’t changed. Milk is perhaps a better example, albeit it’s more noticeable.

p.s. You may want to bookmark this page, as I don’t think Google finds it noteworthy enough to index.

Finds of the Month

1. Article of the Month

According to this article, a study from 2017 found out that your smartphone may be having a negative effect on your brainpower; in other words, it’s probably making you “dumber” by the day.

The bitter irony in that conclusion is twofold: first, the word smartphone has the prefix smart which points to the fact that the device is no longer just a mere phone. All these other things it can do beside making calls is what makes it smart, such as accessing a wealth of information on the virtual library that is the internet. In this particular sense, the smart prefix implies that the device has the capacity to make its users “smarter” yet oddly the opposite is what’s likely happening.

The second irony is less egregious, just a poor choice of words. Nowadays, the opposite of a smartphone is what’s called a dumbphone. What used to be the “official” name — featurephone — seems less of a misnomer now. Ironically it’s this unflattering dumb of a phone with its noisy keypad, tiny screen and exceptional torch that earns it the title of mulika mwizi that is in the long run more merciful to your faculties.

The enlightening effects from unceasing smartphone usage have been so effective that it was necessary to invent a special shorthand, namely tl;dr, to signal how dramatically the value of our time has risen in light of our incapacitated attention spans. In any case, seeing that article may only attract a paltry amount of eyeballs, this seems like a perfect opportunity to demonstrate its utility.

TL;DR: Worried about how long, or often you feel the need to use your smartphone? Well, that should be the least of your worries since the mere sight of your smartphone is potentially limiting your brain power. Why? Because even when you don’t have your smartphone with you — for instance when it’s on the table, in your pocket, bag or in another room — you nonetheless expend a lot of mental energy trying to stop yourself from using it.

This mental energy is wasted when it would otherwise been focused entirely on the cognitive function at hand, such as tasks that require your full concentration. Suddenly it makes a lot of sense why using a smartphone while driving is a very bad idea.

2. Picture of the Month

The other day I heard on the radio that Kenya is ranked at position 119 amongst the world’s happiest countries. I only bring this up because a few days earlier I had come across another statistic which I find more “measurable” than the enigma that is happiness. Here it is: 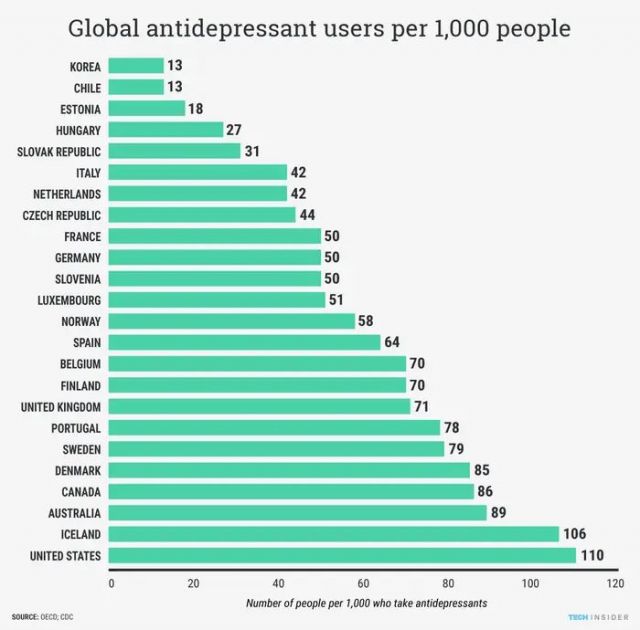 Isn’t it peculiar that citizens who should have fewer reasons to be unhappy are also the ones consuming the most anti-depressants? Perhaps the more reasons one has to believe they ought to be happy, the more likely they’re to be unhappy. Or, it’s just pharmaceuticals opening a new frontier for more healthy profits — preying on the happy rich since the poor are afflicted by the deadlier sickness of having a meagre disposable income.

3. Song of the Month

This is probably better suited for an article, but for the time-being this should suffice. If you love Congolese Rumba, I suppose you’ll find this somewhat interesting.

You’ve probably heard that rumba, or lingala music as we often call it, is a genre that is derived from Cuban music, in particular, Cuban Son. Now, I’m no expert in this, but apparently the African slaves that were sold to the West Indies took with them their African music traditions.

This factor inevitably influenced the music from these regions, such as the aforementioned Son, which then got reabsorbed back by the Congolese in their music (soukous) when the Europeans brought with them Cuban music records and introduced the electric guitar. This music from Latin America was played on the radio and even played live as this paper states, “the colonial governments hired Cuban bands to entertain the colonial officers” in Belgian Congo.

The whole point of that short history lesson is illustrated by the song of the month — El Carretero by Guillermo Portabales. If you’re a fan of Kekele or even Franco, then that should sound somewhat familar. If not, compare with A Moins Que Namikosa by Vicky et L’Orchestre O.K. Jazz and Ba Kristo by Kekele.

These latter two are essentially covers of the original El Carretero by Guillermo Portabales. Until recently I was only was aware of Ba Kristo, so when I heard El Carretero for the first time, I couldn’t help but find out why it sounded familiar.

Based on this relationship, I’m tempted to draw similar lines with Roots Reggae which for some reason we have a strong affinity to. The drumming (see: Nyabinghi) gives credence to this idea. For an example of a song with these drums, listen to Congoman by The Congos.

4. Video of the Month

I came across an interesting documentary called The British Empire in Colour that has some scenes of Kenya during the colonial period. It’s a difficult watch as it’s certain to open old wounds, wounds you didn’t even realize you had in the first place.

Nevertheless, it will put certain things in perspective if you invest the time to watch the entire three parts. For example, the negative effects felt to this day from the fine mess the British created when leaving their colonies rather haphazardly, especially in their African, Indian and the Middle Eastern (Palestine) colonies.

You can watch the second part with the Kenyan scenes here. The first part is available here and the third one here
~

And that marks the dreary end to this first newsletter. I hope you learnt something worthwhile from my ramblings. Till next time.

Found this newsletter useful? How about you forward or share it with somebody who may find it interesting. If you’re not yet subscribed, you can do so by visiting this page.

Something to imply expertise, authoritativeness and trustworthiness ought to be here. I however prefer to just say that I enjoy writing and leave it at that. Thanks for stopping by.